The winner of the African Woman Player of the year laurel is from South Africa and she is a sight to behold.

South Africans have something to smile about after their star Chrestinah Thembi Kgatlana was named the 2018 African Woman Player of the year.

READ ALSO: We chose savings and loans over selling off- GN bank

The nation was broken down earlier when CAF picked Egypt over them as the hosts of the 2019 African Cup of Nations but have been consoled after their forward ended a long-standing West African dominance to win the award.

Kgatlana shrugged off stiff competition from the Nigerian duo of Francisca Ordega and Asisat Oshoala who also play for Washington Spirit in the USA and Dalian Quanjian FC in China respectively.

The awards gala was on Tuesday night at the Abdou Diouf International Conference Center in Dakar, Senegal.

The 22-year old, who was making her second successive appearance in the final shortlist, has denied Oshoala her third successive and fourth overall title.

READ ALSO: I Didn’t Know I Was Going To Get Married To My Best Friend In 2018 -Tracy Sarkcess Reveals

She emerged the most valuable player and top scorer (five goals) at the 2018 Africa Women’s Cup of Nations held in Ghana last December as South Africa finished second and booked a spot in this year’s World cup.

Her run last year was followed by a big-money move to Houston Dash in the United States of America.

Kgatlana made her Banyana Banyana debut in 2014 and becomes the second South African after Noko Matlou (2008) to win the award.

Her goal against Nigeria in the AWCON was also named as the best goal of the year. 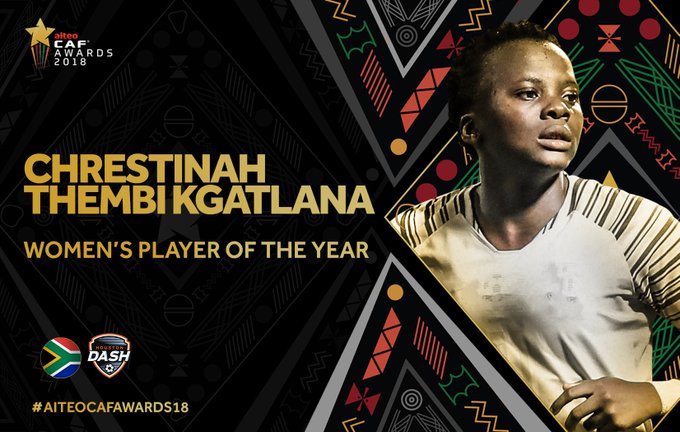