Oluwa Burna  aka Burna Boy is at it again and this time, the target of his wrath are Nigerians, who he says represent the largest number of ‘unprogressive fools.’  What many have called ‘Trending gone wrong’ led to an unofficially declared Burna Boy day on social media following his outburst after he was announced as one of the performers at the upcoming 2019 edition of the Coachella festival.

Burna Boy had an issue with the way his name appeared on the line-up poster, complaining about the size of the character and this generated a lot of reactions all day on Twitter. 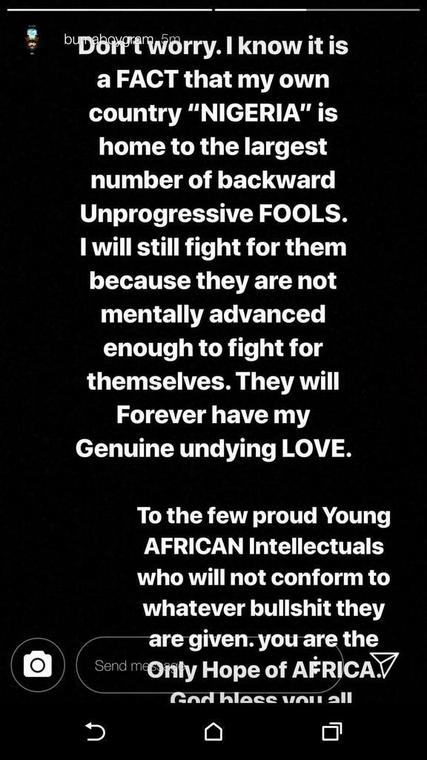 Perhaps, taken aback by comments and opinions from a number of his citizens, Burna Boy has taken to his Instagram page to complain about the ‘backward unprogressive’ mind state of Nigerians.

In a now deleted post shared on Friday, January 4, 2018, Burna Boy wrote, ”Don’t worry, I know for a fact that my own country, NIGERIA is home to the largest number of backward Unprogressive FOOLS.

I will still fight for them because they are not mentally advanced enough to fight for themselves. They will Forever have my Genuine undying LOVE.

To the few proud Young AFRICAN Intellectuals who will not conform to whatever bullshit they are given. you are the Only Hope of AFRICA. God bless you all.”

He has also promised to hold a press conference where he will further explain the reasons and justification for his actions.

The self acclaimed African giant with full name Damini Ogulu was born 2 July 1991. The Afrofusion singer and songwriter and grandson of Benson Idonije was born to parents Mr and Mrs Ogulu in South London, England.

After the self acclaimed giant split from Aristokrat records, in 2015, Burna Boy created his own record label called “Spaceship_ent. he released Outside in 2018. On January 3rd, 2019, he was announced alongside Mr Eazi to be on the artist lineup in their debut outing on Coachella Valley Music and Arts Festival.

Does Burner Boy deserve to be dragged on social media for this or is he indeed an African giant? Please share your thoughts with us below.