People are doing all sorts of things out of poverty induced frustration. A Nigerian woman has admitted to doing “the worst thing to humanity” by selling her 1-week old baby to raise fund for establishment of a provision shop.

A report by lindaikejisblog.com indicate that 23-year-old Blessing Aluna, pictured above, has been arrested by officers of the Niger state police command for selling the baby for N200, 000.

The young mother who resides in Rimi Lokoja Local Government Area of Kogi State is alleged to have connived with one Oludare Jeprince believed to be her boyfriend to commit the heartless act. 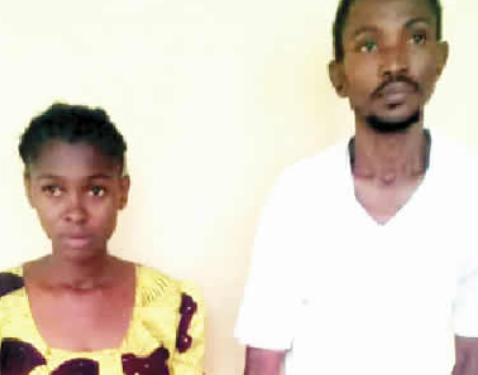 Oludare Jeprince’s role in the crime was to kidnap and facilitate the sale of the baby, reports say.

During her interrogation, Blessing told the police: “Imagine me selling my child for money; that will tell you the level of hardship in the country. I sold my own child for N200,000 in order to open a provision store in Suleja at least to take care of myself and my siblings.”

As if she had just regained her senses, she admitted: “I have done the worst thing to humanity and especially to my own child. I don’t think I deserve to be alive, let the law take its course.”

Spokesperson for the Niger state police command Muhammad Abubakar confirmed the arrest of Blessing and her accomplice, adding that they would soon be put before court to face the consequences of their act.